The Historical Society publishes a monthly column, Tales of our Town, in the local newspaper, The Strathroy Age Dispatch.
Local writers are invited to submit stories and ideas﻿﻿ for future columns. Any story with local interest will be considered. All you need to provide is the five "W’s" and how—who is it about?, what happened? where, when, why and how did it take place? Contact email talesofourtown@gmail.com with subject line Tales of Our Town idea.

Newest Tales of Our Town Article

The ‘Kist’ has arrived! by Bill Groot
​The news that the ‘kist’ had arrived brought both excitement and sighs of relief to many post-World War II Dutch immigrants. ‘Kist’ is a Dutch word meaning ‘crate’. From mid-1947 through to the 1960s, most emigrants left with several suitcases and one or more large wooden crates. These crates were shipped separately and didn’t arrive until many weeks after the immigrants had settled in their new homes. In the meantime, where would they sit, or sleep, and what would they use to prepare meals? While the suitcases carried clothes and personal effects, the crates carried everything from the furniture and household goods needed to furnish a new home to the equipment needed to establish a trade or business. A few people even shipped farm machinery or a prefabricated house.

So why did these families emigrate, and why did they bring so much? It would have been easier to bring money and buy goods on arrival. But their story is unique. Postwar, the Netherlands economy was in shambles and many citizens despaired over their future opportunities. The country was recovering from five years of occupation by Nazi Germany. The Germans had destroyed its shipping ports, plundered its industrial resources, flooded 8.5% of its arable land, emptied its warehouses and government treasury, destroyed its transportation system - and even stolen 90% of the national vehicle, the bicycle. Once liberated, the Netherlands had to impose strict currency exchange rules to protect the value of the Dutch currency. This meant that emigrants could take only a small amount of currency out of the country. But they were allowed to purchase goods within the country and have them shipped to their destination along with their personal belongings. Thus, the need for the ‘kist’.

Adrian Groot’s fiancée, Katrien Keesom, was still living with her parents so she had few possessions, but she planned to marry and start a household once she arrived in Canada. She left the Netherlands on October 18, 1950, crossed the channel and then the U.K. to Liverpool, where she boarded the Franconia. It arrived in Quebec City on October 26. Trien’s kist weighed 300 kg. and was shipped on the Prins Willem V from Rotterdam to Montreal. It cost $15 to ship the kist to Strathroy via the CNR, arriving on Dec. 2, 1950. The shipping manifest read: “Used Household and Personal Effects including – Dishes, Bedding, 2 Floor Coverings, Hand Sewing Machine, 2 Bed Lamps, Curtain Material, Kitchen Utensils and Personal Clothing”. The kist was made into a baby bed which was used for all eight Groot children. Later, it was converted into a small table with two chairs so the youngest child could have tea with her dolls.

The Willem ‘Bill’ Bruinink family came to Canada on the S.S. Volendam in October 1951. Their kist contained equipment required to operate a bakery. After converting the machines to Canadian electrical voltage, they opened the Bill Bruinink Bakery in Chatham. The wood from the kist was used to make shelving. After operating successfully for a few years, the bakery was sold and the Bruinink family moved to Mount Brydges, where they started Hollandia Bakery.

Cornelius, 56, and Theodora Timmermans, 57, with five of their children, came to Canada in May 1950 on the S.S. Volendam. Their kist measured 14 cubic metres in size. Among its contents were seven bicycles. It arrived first in Winnipeg, but a few months later ended up in Tupperville, Ontario, when their sponsor, located near Portage La Prairie, failed to adhere to the terms spelled out on the immigration document. After working in the fall, harvesting sugar beets in Tupperville, Cornelius purchased the Knight farm in Adelaide Township. The kist was moved one more time and became a mud room attached to the house.

Most Dutch families have a story to tell about their kist. It became part of their family lore. The wood from larger ones was often repurposed for practical uses, while smaller kists were saved to become family heirlooms 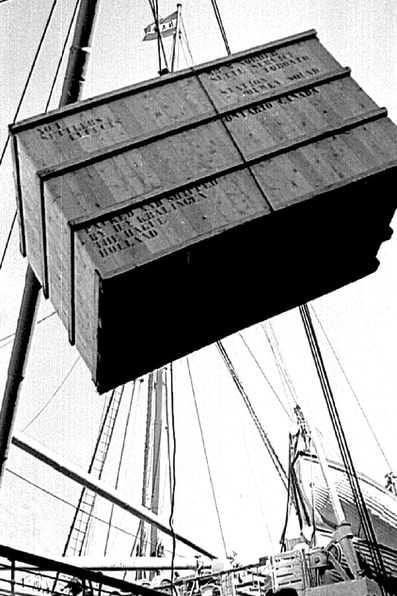 A large Dutch kist is being unloaded from the hold of the S.S. Volendam in Halifax in May 1950. Photo courtesy of Hubert Timmerman
Past Tales of Our Town